Does this count as a romance vn?

I'm really enjoying Ocean Avenue and hope to see more content (I definitely didn't download it just because the main character is a raccoon). For real though, I love the story, the art, and I think Vic is hilarious!

I'm honored to hear that! It's nice to see people enjoy my silly ideas.

Hello, Dirk. I played an earlier version when you first released the game and I waited over a year know and finally saw some better progress and I'm impressed!!! The art-style is fantastic and colorful! And there's some lesser know species you have chosen like maned wolves, I hope I get to see more in the future. Keep up the good work! 😀

Thanks! I'm taking my time with it, and putting what I love in it.

Didn't you had a similar message below but with another image? 😅  Perhaps you forgot because it was sometime ago, but it's there.

Yeah I know, thought it'd be funny to just randomly bring it up again

Do you need to rest? Don't push yourself just because you couldn't put the update yesterday. Things happen that are beyond our control every now and then.

I hope there will be a route for him in the future.

We sure love our leggy bois!

Unfortunately, we do not have any immediate plans for a Ruben route, but he will be present throughout the other routes.

I enjoyef the new update. Apparently the police don't like hyenas. How large is Vic? Also, Is there going to be height stats of the main characters including the human character later on. Just curious how humans compare to the furry characters in this vn.

Vic is 7’1”. It could be a fun idea to make a stats page for the characters. I’d have to take some time for it, but maybe down the road. Humans tend to be 6-12” shorter on average than many anthro species. I haven’t thought much else about it as of yet.

How are things going with the hiatus as of late?

I felt identified with the protagonist and of course I loved the story! , sad for the hiatus but I won't lose hope

Will there be nsfw?

The only noticeable con is the quality of some sprites and backgrounds. Otherwise, the game is quite good. Personally I'm interested in Selma's route. Can anyone say whether she will have one?  By route I mean romantic relationship.

Whats the gender of the protagonist?

Male I'm pretty sure. I don't see any notion that he's anything else.

I'm really enjoying this and I can't wait for the next update. Anything that has Eurovision and hunky hyenas get an A+ from me!

When's the next update? I want to see more of Vic and Marcus

I'm not sure, because I'm taking on another creative project at the moment. I'll try to work on it between that, but if I had to guess, maybe in a few months.

I must say I was a bit put off by some art I saw at first, but I accidentally saw some screenshots of the VN on twitter (thanks garrus :P) and I ended up trying it out. I'm not really big on volleyball or sports but I like this marcus fellow :p

I just want to know is Vic a option I'm confused

Is this VN NSFW?

Wait a damn minute, I had no clue dirk made his own VN ._.

Is the update almost upon us?

I'm gonna make a post about it on here, because we're in a bit of an odd situation. So yes, but also no.

Oh my god it's Logan Paul

This hurts to read. XD

You gotta admit there's a resemblance

Reply
quincy and kiko1 year ago

Yes, but we may add NSFW scenes in the future. We will mention it in the description if we do so.

Ok, is not only me. Nice

So I realized I accidentally left extra dialogue from Day 4 in the code, so I had to remove it, and repost the update. Should be downloadable now!

Yes, now we can. And it's understable

This is strictly my two cents, perhaps others disagree.  I notice on your patreon page you are offering side writing projects for increased tiers.  This could actually turn people off and have them not be patreons.  Because now they're thinking about how time will be spent away from the project they want to see progressed.  I've seen with VN porjects, picture galleries and decision polls offered for higher tier.  May want to consider using those as rewards instead.

Thanks for the feedback. They are voicing commissions, rather than writing, but no one has asked for those things yet. I might consider adjusting the tier with specific artwork and VN content, but I'll have to ask my Patrons first for their opinion.

Before downloading it i just wanna know is there any nsfw involved?

Good question! There is no NSFW content as of the latest update. If we decide to place NSFW content in the game, we will mention it during the update's announcement.

I can't install the application and I don't know what to do :(

Which version are you downloading? PC, Mac, or Android?

Hmm...I'm not as familiar with Android, since I don't own any Android products. Does it not download, or can it not open? Did you already have a previous update of the game?

That's strange. I know for sure that many people downloaded the Android version and could play it. If anyone sees this comment, maybe they can give instructions on how to reinstall it properly.

The only other explanation I can think of is not having enough storage on your Android device. Sorry to hear about the issue!

Do you have some file explorer?

Just one thing: What the meaning of B.L.O.? XD I couldn't find it on internet. And since english is not my native language...

Normally the sandwich is a B L T (bacon, lettuce, tomato) but Marcus and Evan talk about how they hate tomato, and change it to onion instead when they make the sandwich.

Hello. This VN seems pretty cool. I am using an old computer, but skipping is really slow, in the sense that it stutters a lot more than other VNs made with renpy.

Interesting. I did disable timed events, starting with update 3.1, so there should be fewer of those. If there are any events that slow it down besides choices, let me know, and I'll see what I can do there.

hey dirk there is one problem, so I'm stuck in main menu and can't click anything, and i think it's because i recently updated my android into android 11,

this also happens in other renpy vn like i.c.o and lyre, and i already ask them about this bug but, cetrus dev of ico said he can't help since he say he's not much a programmer himself and i don't get answers from developers of lyre but there is some user that have same problem agrees with me that's its because android 11 since his phone is also android 11, this is so weird since other vn is doing just fine in android 11 like tenis ace or temptation ballad so why only you guys that have this bug, then i remember that you help cetrus in programming so i try your vn and since i already have your vn before because i see your YouTube chanel i just need to install and open it but then same thing happens i stuck in main menu and can't click anything

If anyone else is playing this game on an android, could you reply to this comment, saying if the game works for you or not? I don't have an android myself, so I can't troubleshoot the issue directly.

I have same problem with android 11, I recently got new tab, and some vn not start after install, like Lyre, TSR and now ocean avenue, game crash in menu, didnt find any solution, my tab has only 1280 resolution, my old tab i never updated on adroid 4 worked all but battery is so bad now

You have to uninstall and reinstall it back, and it will work normally, except erasing all save file

Any news about a new update release from the VN? It's been a while...

Yes! I just posted on the official Twitter account. Update 3.1 should be out within 2 weeks (3 at the absolute latest). We have been reconfiguring GUI layout and will have three fully revamped CG's done for this update!

There seems to be a problem with one of Roger's sprites. It's constantly marking it as missing. 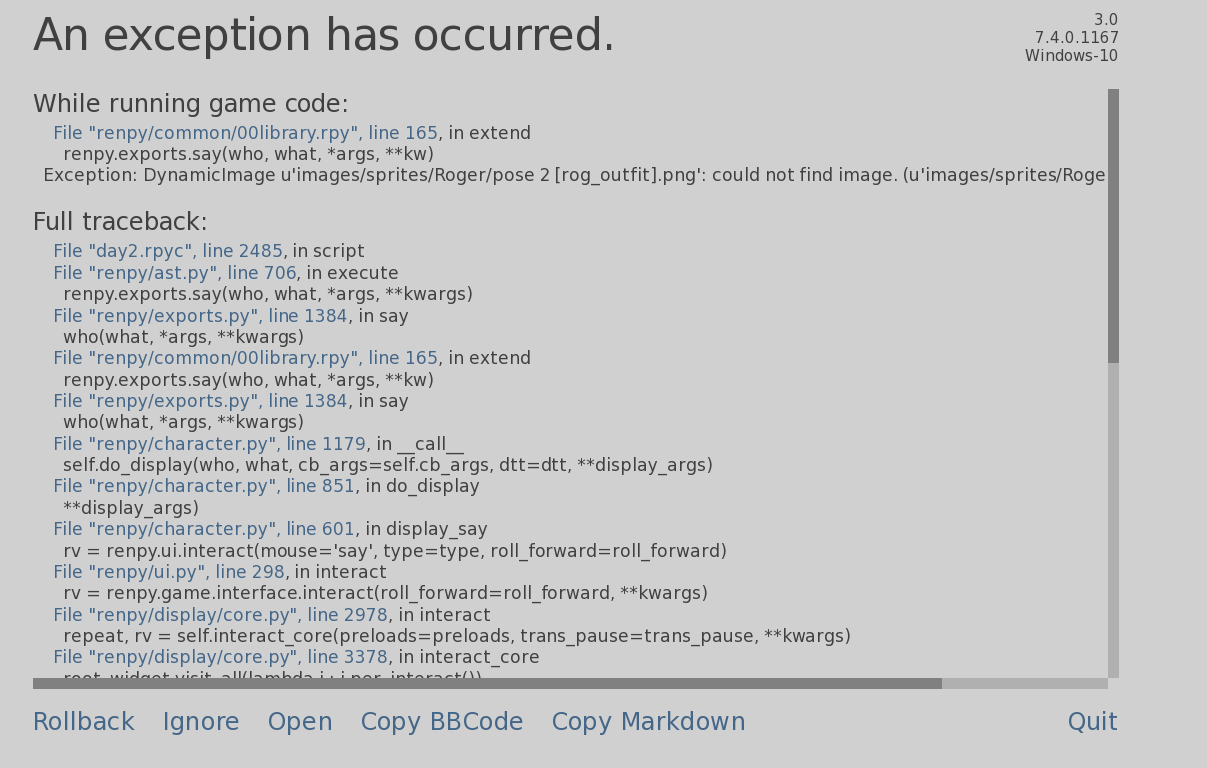 Yeah, the same issue is happening to me :/

looks to be a typo in the file name 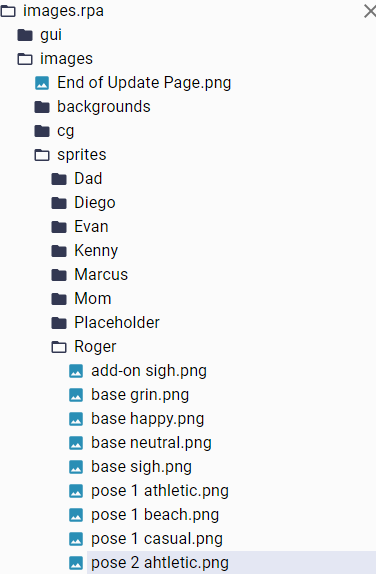 Thanks for finding the cause of the error! I'll make changes to the file, and upload them ASAP.

EDIT: It should be fixed now!

Thanks for letting me know! I found the issue in the replies, and have corrected the code typo. The game should be re-uploaded with fixed code within the new few hours (since it takes my computer a while to upload these big files, and I also have to update the ones placed in my Patron folder).

EDIT: It should be fixed now!

Vic looks deliciously hot. Can't wait to see what the next update brings!

I'm working on a scene with him right now! :)

I really appreciate the fact that you used legit pictures of SoCal, it's been super fun finding the locations on google Maps

Thanks for the answer, one more question, are there romance options in this VN?  And if so are any of them LGBTQ related?

Yes. Most of them are LGBTQ related.

I'm considering giving this VN a try but would like to know first, is there any NSFW content/scenes?

Currently, there are no NSFW scenes, but possibly in the future if it fits the story (not sure when exactly at the moment).

I watched some of your vids, isnice

Thanks! Looking forward to putting the same quality and interest into my VN! :)